Is it Farley or Farly #52 Ancestors

My Farley line has been very difficult to trace.  I mean how many Edward Farley's can you have.  My maternal Grandfather Edward Francis Farley was born in Washington, DC  3 May 1892 and he was the son of Edward Francis Farley & Ella A (Lott) Farley.  So far they have been tracked with no problem. 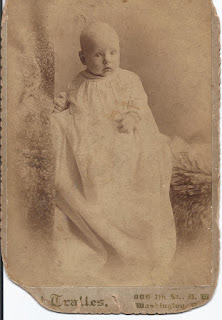 I love this photo of pop, chubby cheeks and all.  The next photo of him is what I believe may be a wedding photo. 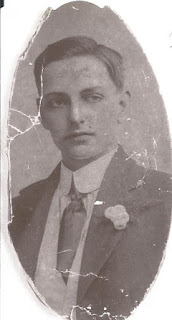 His father, Edward Francis Farley, Sr deserted the family leaving my grandfathers mother alone to raise 5 children.  I have no idea when he left the family but do have a few stories that were passed down.  My grandfather, I will call him Jr. helped support the family by picking up coal found along the railroad lines.  Jr was the 2nd eldest of the family. 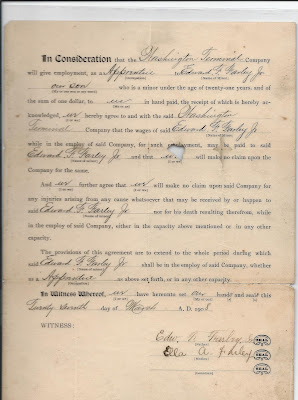 Edward Francis Farley Sr was the son of Edward Francis & Ellen (Cunningham)Farley.  He was born in Philadelphia, Pa 2 September 1866. So that gives me 3 Edward Farley's to be searching for.  Now I have most of the information on my grandfather and a fair amount of information on my great-grandfather but my great-great grandfather is the problem.  I know that he and Ellen (Hellena) were both born in Ireland and they were married in Philadelphia. From the Census information that I have gathered and information from the church on the family I know there were 2 sons, my great grandfather and an older brother James, who I believe died in 1890.  It is really hard to tell whether I have the correct James or not.  Finding James, Edward & Ellen (Hellena) Farley will mean I need to do a field trip.  There are many Edward & Ellen Farley's buried in Cathedral Cemetery in Philadelphia.  The hunt will have to start there.

Posted by troublesmom at 6:45 PM No comments:

I've really been thinking about this one and there are really two people I would love to invite for dinner and ask many questions.  I will just go with one person in this posting.

My great-grandfather Frederick William (Friedrich Wilhelm) Kosack.  I know he was born in November 1843 in what we thought was Germany.  I know his mother, 2 sisters and 3 brothers came to the United States in January 1859 on the ship Johannes arriving in Baltimore, MD. 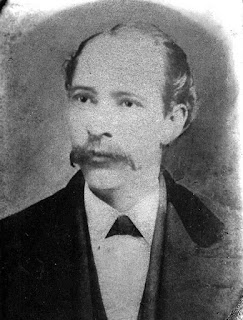 I believe that this photo of my great grandfather Frederick was taken around his wedding time.

He joined the Union Army along with 2 of his brothers in 1861 in Carroll County, MD Company K, 2nd Regiment, Maryland to serve a term of three years.  His older brothers both had serious injuries - Otto had his left leg amputated on the battlefield in Fredericksburg, Virginia  13 December 1862.  His eldest brother Edward had a gunshot wound to the left hip at the battle in Petersburg, Virginia.  Frederick ended up with Heart problems and was discharged in February 1863.

I have not been able to determine who their father really was, where they really came from - Edward stated that he was from Zierke, Groshurocthum, Possen, Prussia but I just don't know.
Posted by troublesmom at 6:37 PM No comments:

I am trying to get caught up in this Challenge so and hope to keep it up for the year.  This is for the second week of this year.

This is a really difficult one because I have so many favorites. I am going to add 2 both are of my parents as young adults.  I really don't know exactly how old either one of them were when these were taken but believe my father was about 24 and mom was probably about 18.  They married in 1945 in Washington, DC and I have reason to believe these  were taken not long before they were married.  Handsome couple right!  Love and miss them so very much. 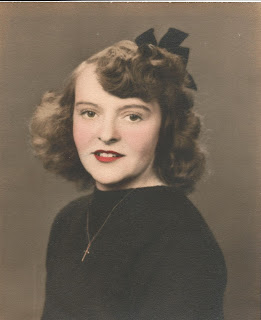 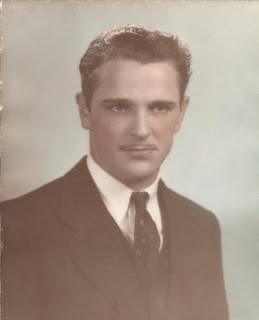 Posted by troublesmom at 1:18 PM No comments: 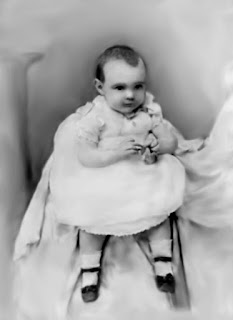 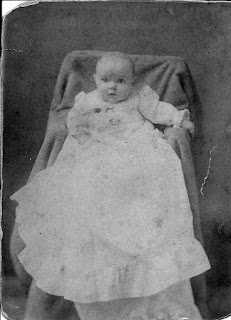 The top photo was my maternal grandmother Ariel Bayne Abbott at the age of 3 months old.  She was the eldest daughter of Robert & Ariel Elizabeth Abbott.  The 2nd  photo is of Ariel  at the age of 7 months.  As far as I can tell the family was living in the Annapolis, Maryland area. 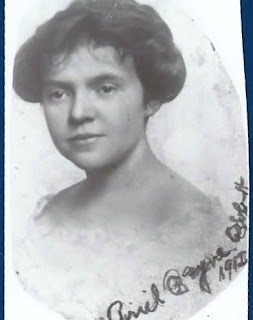 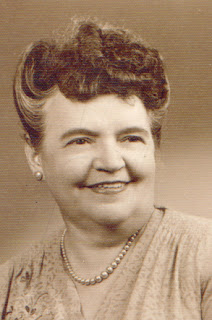 The  photo above was taken in 1912 and that is her handwriting on the photo.  This 4th photo has always been a favorite of mine.  I remember hearing that she worked at Jelleff's department store and loved it.  I understand that she worked in the millinery department.  She loved hats.

She married Edward Francis Farley August 1913 and they had 5 children.  My mother was the 2nd youngest of the 3 girls. Nana lived in DC until moving in with my parents and Pennsylvania became her home. I enjoyed spending time with her and she taught me several goodies to make.  Her fudge was an easy recipe and unfortunately I no longer have that one. 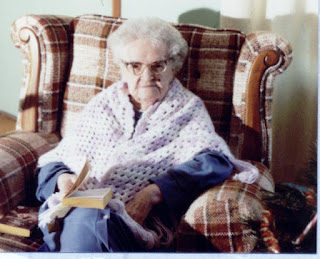 Posted by troublesmom at 1:03 PM No comments:

I'm late in starting this but will give it a go.  I will start with my ABBOTT family.  My maternal grandmother was Ariel Bayne ABBOTT and she was born in Annapolis, Maryland to William Robert & Ariel Elizabeth (PARLETT) ABBOTT on 27 September 1891. Ariel married Edward Francis FARLEY on 14 August 1913 at the Second Baptist Church in Washington, DC.  I am not sure how long they knew each other but I don't think it was long.  When Ariel met Edward she was engaged to a midshipman from the US Naval Academy.  Needless to say her family was not happy when she broke off the engagement to the young man.  Long ago I had his name but that was before I was doing any genealogy.

I don't believe there were many good feelings from the ABBOTT family to the new son-in-law and he really didn't care much for them from what I gather.  I know when my mother was born she was named after one of Ariel's sisters and my grandfather would never call her by her birth name.  That is a very long story I will go into at a later date.  Edward & Ariel (ABBOTT) Farley had 5 children.

Ariel's father William Robert worked at the Government Printing Office in DC.  He was born 19 February 1866 also in Annapolis, Maryland.  He was the eldest son of William Robert & Frances (Fannie)Virginia (WILKINSON/WILKISON). I was pleasantly surprised when I requested his work records that I not only received the records but a great photo of him with his signature from them. 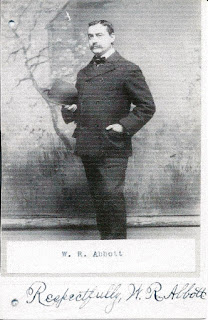 Quite a handsome gentleman I believe.  William Robert & Ariel Elizabeth PARLETT were married 19 June 1888.  Theirs was a very large family, my grandmother Ariel was the eldest daughter of 11 children. 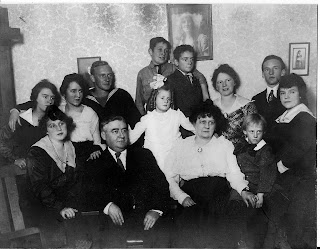 It is believed that this photo was taken not long before William Robert  passed.  My grandmother, Ariel is all the way to the right in this photo. William Robert ABBOTT also worked for his father William Martin ABBOTT at the EVENING CAPITAL & GAZETTE NEWSPAPER.

This is for the first week of the new year.  I'm running behind on this Challenge.

I have not been doing any research for quite some time so I thought I would start back with at least some of the names that I am trying to get more information on.  These are names of my Ancestors.  I will post soon on my husbands.

Posted by troublesmom at 11:11 AM No comments:

I have very limited information on Rosa Z. Owens.  Rosa was born 12 February 1882 in Maryland, Rosa was married to Frederick William Kosack but I have not been able to find where or when they were married.  Rosa died 5 December 1936.  These small bits of information on Rosa are only due to the information on her tombstone.  According to the story from my father, Rosa was in St. Elizabeth's Hospital in Washington, DC when she died.  I have searched Maryland, Virginia and Washington, DC not only for her marriage to my great uncle but also for her death certificate.  Family Search, Ancestry neither of them have her.  I have tried various spellings to no avail

I know that Uncle Fred had remarried and his 2nd wife I know a great deal about.  I have yet to find a marriage record for them either.  I do have death certificates for both of them but Rosa is a really big question mark that I would love to solve. This is the only photo I have of Uncle Fred & Aunt Rosa.  I have
no idea when this was taken. 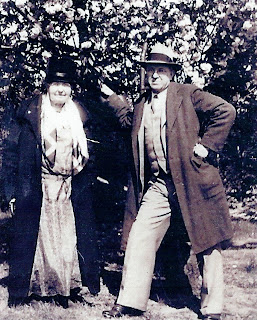 Posted by troublesmom at 12:49 PM No comments: